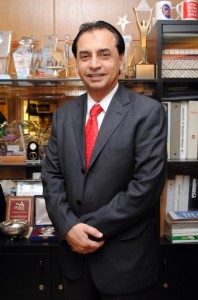 Pakistan is on the crossroads to a long-absent political stability with general elections on May 11 to mark the country’s maiden uninterrupted democratic transition, the multinational retail giants like the Kentucky Fried Chicken (KFC) are basing their future business growth strategy on new, relatively peaceful, markets in the terrorism-hit but dividend-yielding country.

Rafiq Rangoonwala, CEO Cupola Group, the operators of KFC in Pakistan, says that the globally-acclaimed fast food chain is eyeing Punjab as a potential region for expanding its over $ 30 million countrywide fast food business network. Mr. Rangoonwala is a self-made business executive who started his career as a cook from an American KFC outlet.

“Law and order is the specific reason,” Rangoonwala said, in an exclusive interview with IBEX, while explaining his claim that businesses were fast shifting from the violence-hit Sindh, especially Karachi, to urban centers in Punjab province.

What is the current situation of KFC as a business in Pakistan?
Well, we happen to be the largest fast food chain in Pakistan with 64 of our restaurants operational in 18 major cities of the country. On April 19, another food outlet was added to our network in Sargodha. We have been faring well since 1997 when our first branch was established in Gulshan-e-Iqbal, Karachi.

What is KFC’s investment portfolio in Pakistan?
KFC’s total estimated investment in Pakistan is in excess of $30 million. Overall, we have been able to create around 20,000 direct and indirect jobs in Pakistan.

In your opinion, what are the challenges faced by the food/retail industry in Pakistan?
These are divergent in nature. Instead of being encouraged to invest more in Pakistan, the multinational firms operating here are facing several lingering problems. Firms do not have a level-playing field for the businesses in terms of taxation. Those who are regular taxpayers and entitle their employees to their due rights are subjected to unnecessary probes, while others walk free.

Law and order is another burning issue here. Frequent forced and voluntary business closures due to strikes, violent incidents of arson and killing and menaces like extortion are taking a heavy toll on businesses.

The rupee devaluation also has adversely affected our business with cost of imported stuff like French Fries, Corns etc shooting up for the unfavorable rupee-dollar parity. Increased tax rate on imports too has increased the cost of doing business for us.

Energy crisis, of course, is a longstanding challenge which is decreasing our profit margins. Pakistan is the only country where the utility cost is higher than the labor cost. Additional expenditures like inflated prices of generators’ fuel etc. have greatly added to our operational costs.

How has inflation affected this industry?

Inflation always increases the cost of goods and also reflects adversely on our sales. Inflation is always there to haunt you as a business entity. The official figures on price hike are by and large deemed as incredible. Still, it takes its toll on retail businesses. In my opinion, things during last five years have intensified for the want of long-term policies. There has long been a pressing need for the recognition of service sector, especially on retail side, as an employment generating industry.

If you compare energy giants like Hubco and retailers like KFC in terms of employment generation, Hubco only employs a few hundreds; whereas KFC has this number in thousands as it is also associated with the entire fast food chain ranging from packaging to advertising and so on. Also, we contribute a handsome amount to the national kitty on account of General Sales Tax, besides producing a trained human resource.

The current narrow tax net should be expanded to all. Tax evaders should be checked. Groupings on chambers of commerce level must be discouraged. The decision-making process should be inclusive with the inclusion of all stakeholders. Actions like the closing shops by 8pm for energy conservation must not be repeated.
What is the size of Fast Food business in Pakistan and its tax contribution?

According to a safe guesstimate, the yearly volume of fast food businesses, including KFC, McDonalds, Subway and others, in Pakistan amounts to over Rs 10 billion.  16 percent GST comes to Rs 1.6 billion. This means, our contribution is not less than a billion rupees under the head of GST only, excluding other taxes.

Which sectors do you think have potential for investment?

The high-yielding energy sector is attracting investors nowadays.  Given the country’s increasing fruits and vegetables exports, the establishment of much-needed cold storages is also in focus. The food industry also has higher returns.

Is the food business directly proportional to the population?
This depends on the fact that if all the indicators are in their respective positive zones. Like, you cannot exploit a huge population as your strength if there is inflation in the country. Similarly, if these two indicators are positive, but terrorism haunts you, the two automatically turn neutral. It is a puzzle where all the indicators must be in conformity. The fast food business in Pakistan is still in a state of infancy. We have not reached the level where one could estimate that how proportionate our business is to the number of people. The last survey conducted revealed that Pakistani customers visit the fast food restaurants once or twice a month. This number should be increased to that of Dubai where the number of customer visits is thrice a week. To increase this number, the customers should be offered value addition coupled with a fascinating experience in terms of food and service. A majority of fast food chains are proactively pursuing this value addition program to entice customers.

A number of great food chains are opening in Pakistan, what impact does it have on KFC sales?
This expansion in the size of the pie augurs well for the food business where competition always proves to be a positive phenomenon.

We would have to change the mindset that not every businessman or investor is a thief or profit-making, for that matter, is a bad thing. This change has to start from the top. The policymakers have to take the stakeholders aboard to develop long-term visions to promote business and industry.

What internal organizational issues are local firms facing?
We all need to replace the deep-rooted “Seth” mentality with a purely professional environment in our business units. The emergence of new generation, which is highly educated and well-trained, is bearing fruits in terms of promotion of professionalism. All we have to do is to treat and give breathing space to our young professionals who would be in a better place to decide the fate of the business they are in charge of.

What does branding mean for small businesses?
Branding is important for all kinds of businesses. You propagate your brand in line with the resources available. You first need to identify your brand personality to be delivered to your target audience. Today’s social media offers you a cost-free reasonable platform. KFC has close to 500,000 fans on our Facebook web page.

Which region has potential for KFC’s future expansion?

Punjab, we think, is the potential region. Our future growth strategy will focus on Punjab where urban centers like Sahiwal, Faisalabad and Gujrat are still totally untapped.

Why Sindh isn’t included, especially the financial capital Karachi?
Law and order is the main reason behind this. Karachi still is the financial hub, but will not remain so if the stakeholders failed to wake up to the ongoing shift of businesses to Lahore.

Unlike Punjab, the violence-hit Sindh appears to be more vulnerable place for the risk-averse businessmen who keep all potential obstacles in mind while investing. Punjab scores very high in this regard.

We will finalize our decision after the new government comes to power but we are sure that we will grow there (in Punjab). Karachi is not being owned by its stakeholders the way it should.

What are your future plans?
For past year and a half, we are more focused on enhancing our existing assets to bring them at par with international standards. We have covered almost 80 percent in Punjab and have started work in Sindh. After May 11 elections, we will be reviewing our new development strategy according to the next government’s vision and policies.

Would you like to give any message to our readers?
Pakistan is a country enriched with talented people, forests, four weathers, fertile land and seas. We should protect this country before it is taken away from us. No one should ever get deluded with the misperception that we can survive without Pakistan.