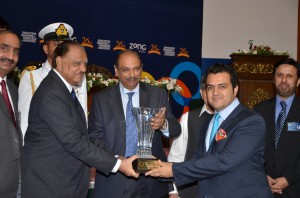 Mr. Walid Mushtaq, the CEO of Roots International Schools was presented the Young Entrepreneur of the Year Award from the hands of Mr. Mamnoon Hussain, President of Pakistan, during the 26th Achievement wards Ceremony of Rawalpindi Chamber of Commerce and Industry on evening of Thursday 26th September, 2013. The ceremony took place at Jinnah Convention Center, Islamabad maintaining its tradition of appreciating the corporate dignitaries with esteemed government officials chairing the event.

Mr. Walid Mushtaq is one of the most successful Educationist and Entrepreneurs  of Pakistan embracing unparalleled triumph at a young age and has been a recipient of several awards, a few include the RCCI Excellence Award and the 100 Business Leaders of Pakistan. Representatives from all the walks of life including prominent educationists, businessman, civil society, media representatives and several other public figures attended the ceremony. It is noteworthy that under the leadership of Mr. Walid Mushtaq, Roots International Schools has emerged on the screen as one of Pakistan’s top educational institutes. What important is that such kind of awards are eventually the recognition of the difference which the Roots International Schools is making under the patronage of Mr. Walid Mushtaq. The winners were chosen on the basis of character full of entrepreneurialism, vision, leadership and innovation.

This award is not only an evidence of the entrepreneurial talent in Mr. Walid Mushtaq but also is an acknowledgement of his efforts towards the education sector of Pakistan. Hence, it can declared that  Roots International Schools have at last stood successful in renewing the perception of education in Pakistan with a confidence that graduates of the Roots will eventually make a difference  after becoming the part of main stream.

Honorable President of Pakistan Mr. Mamnoon Hussain graced the auspicious occasion as the Chief Guest. Mr. President during his speech promised the business community of Pakistan an affluent and prosperous state. He expressed his felicitation toward RCCI for holding a behemoth and astounding award function.