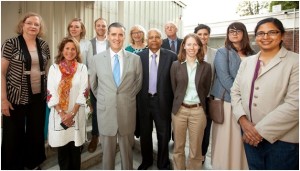 Ambassador Richard Olson had a meeting with a group of nine American journalists from the East-West Center’s Pakistan-U.S. Journalists Exchange program.  The Ambassador talked about issues of press freedom and threats to journalists in Pakistan.

In discussion with the group, Ambassador Olson commented, “We are alarmed and deplore the increased attacks on journalists in Pakistan.  The most recent attack against one of Pakistan’s most well regarded journalists, who has been a staunch defender of fundamental democratic freedoms including freedom of the press here, should be a wake-up call to all who value democracy in this country.  A free media is a key ingredient of democracy, and allows for a healthy national discussion on shaping a peaceful future for the country.  Everyone must do more to defend these courageous voices against those who seek to silence them.”

This U.S. Embassy-sponsored journalist exchange program is planned to grow and extend public understanding of the two countries and their relationship.  The journalists will encounter with Pakistani government officials, media, and representatives from the private sector and non-government organizations in Islamabad, Karachi, and Lahore.