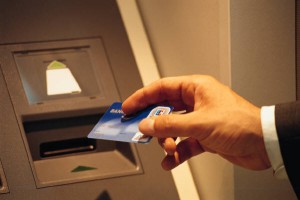 -Post 3Q2013 results, we have tweaked assumptions for our JS Banking Universe. With diverse results across the sector, we have revised 2013E earnings estimates by +19% (BAFL) to -35% (NBP).

-Consequently, we also adjust Target Prices for Pak banks by+3% to -6%. We maintain our ‘Under-weight’ stance on the banking sector where we see limited triggers for core operations in near future.

-As anticipated and in a continuation of trends seen over the last 12 months, banks’ core business remained under pressure in 3Q2013. The same was due to low spreads where sector Net Interest Income (NII) shrunk by 6%YoY in 9M2013 and 3%YoY in 3Q2013. 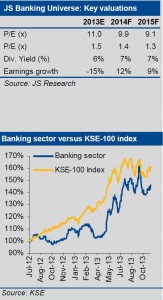 2013 has proven to be dismal for the banks so far as shrinking spreads and unfavorable changes in SBP regulations have taken a toll on core operations. Firstly, the monetary easing (which kick started in July 2011) put banking spreads under pressure, shrinking to a low of 6.18% in February 2013 from a high of 7.88% in July 2011. 6-month KIBOR in 9M2012 averaged at 11.7% compared to an average of 9.4% in 9M2013. As a result, we have seen Net Interest Income (NII) of JS Banking Universe depleting by 6%YoY in 9M2013. In addition, ongoing power crisis and a deteriorating law and order situation also did not help in the case for building up private credit offtake (down 1% in 9M2013). Individually, MCB was the star performer amongst peers, registering PAT growth of 4%YoY in 9M2013 due to reversals in provisions and write offs and higher non funded income (gain on sale of ULEVER shares in 2Q2013). On the other hand, NBP and AKBL were laggards as loan losses dented their profitability. AKBL posted a loss of Rs4.0bn in 9M2013 versus PAT of Rs1.5bn while NBP’s bottom line witnessed a decline of 50%YoY during the same period. While headline profit growth is down 19%YoY, excluding NBP and AKBL from our sample, banking profits declined by 3%YoY in 9M2013.

Post 9M2013 results; we have revised our 2013E earnings estimates for JS Banking Universe by +19% to -35%. With exceptionally low earnings posted by NBP in 3Q2013, we lower our earning estimates for the bank by 35% to Rs4.15 per share while for BAFL we lift our 2013E earnings estimate by 19% to Rs2.91 per share on account of higher non funded income. On the same note, we have also revised our Target Prices by by +3% to -6%. Post our estimate changes, we upgrade our stance on UBL by one notch to ‘Hold’ (from ‘Sell’ earlier) while we maintain our ‘Sell’ calls on MCB and HBL as we see limited triggers for core banking operations.

With SBP’s move to link Minimum Profit Rate (MPR) on saving deposits to the central bank’s Repo Rate, we believe the Central Bank is pushing banks to focus on their core banking business rather eyeing other avenues for growth (investments). With spreads on Savings Accounts now due to remain flattish, we can expect limited NII growth for banks. Hence we remain ‘Under-weight’ on the banking sector.