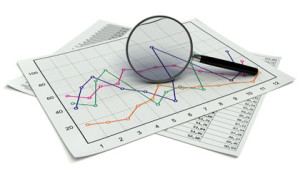 Coming off from increased food prices, the Consumer Price Index (CPI) is expected to stand in the range of 8.4-8.6% for Mar’14 versus 7.93% reported a month earlier. On the sequential basis, this translates into 0.8-1.0% rise in the index versus a decline of 0.32% recorded last month. Furthermore, there is an increased probability that average FY14 inflation will clock around 8.5% which is considerably lower than initial estimates of the government.

Reduced inflation outlook (average FY14/15E CPI 8.5/7.5%) has skewed market anticipation towards a possible rate cut in days ahead. The same is also evident from the shift in participation trend from smaller tenor papers (3M Tbills) to longer tenor papers (1yr Tbill, 3/5/10yrs PIBs). However, we believe the external account will form the basic premises of MPS and the authorities may continue to opt for a cautious approach until there is a sizable improvement in the import cover. 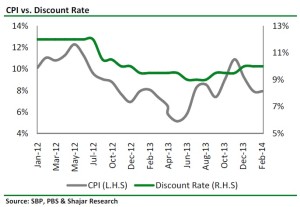 Indicated by weekly Sensitive Price Index (SPI) for the month of Mar’14, we expect increased food prices (particularly perishable) to translate into higher inflationary numbers on the sequential basis this month. The CPI index is anticipated to increase by 0.8‐1.0% in Mar’14 versus a decline of 0.32% in Feb’14. Besides the food index, housing index (29% weightage in CPI basket) is likely to depict negligible change, while transportation head (7% weightage) may show a minor decline on the back of 2% reduction in petrol prices. Furthermore, the 7% PkR appreciating in March also reduces probability of abnormal readings in the smaller heads. The sequential change in the index translates into Mar’14 CPI of 8.4‐8.6%YoY versus 7.93% in Feb’14. Average inflation will likely stand around 8.6% during 9MFY14 versus 8.0% in the same period last year. This also increase the probability of average FY14 inflation to stand around 8.5% which is considerably lower than the initial estimates at the start of the year.

External account to form the basic premises for coming MPS

Despite the probable uptick in Mar’14 inflation reading, the inflation outlook has softened considerably in the recent times. This coupled with relatively improved foreign flows has increased market anticipation of a rate cut ahead. Reading the yesterday’s PIB auction result in conjunction with last MTB auction, there is a decisive shift of market participation towards longer tenor papers. However, we believe that the monetary policy authorities will continue to opt for a cautious approach, unless a substantial improvement in the import cover. Therefore, the premises of future MPS has shifted towards materialization of foreign flows namely 3G/4G auction, proceeds of PTCL from Etisalat, Eurobond Issue, CSF flows, privatization proceeds of PSEs and bi/multilateral disbursements. In this regard, we attach low probability of Etisalat and other privatization proceeds materializing this fiscal year, while 3G/4G auction may translate into foreign component of only US$400‐500mn (residual may be domestically financed). Major swing factor would be improved bi/multilateral disbursements.