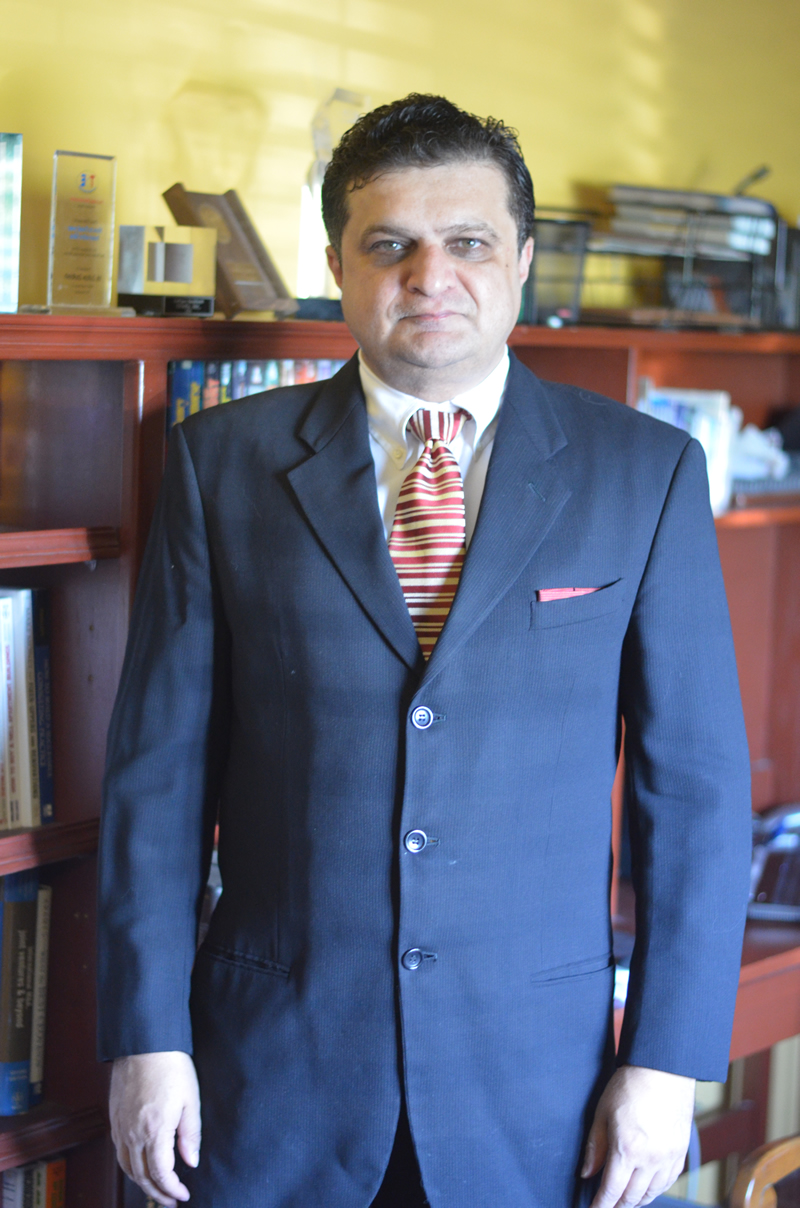 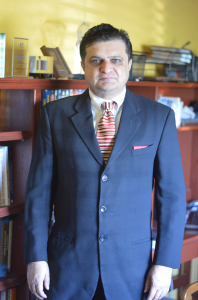 I have been in the IT and Telecom sector since 1990. I completed my education from UT Austin in United States. Initially, I briefly worked in Pakistan with a consulting company called Engineers International. For most of my career, I resided in US and worked with blue chip technology companies in various positions including as the Director and Vice President, first in engineering/operations and later in marketing and sales.  I also started my own company with the help of startup funding from venture capitalists and built a profitable enterprise which I ran for 6 years. In 2006, I sold that company and came to Pakistan and got involved in the telecom sector by joining TransWorld, Pakistan’s alternate internet backbone provider as their Head of Sales and Marketing in 2008. Currently, I am serving as Vice President commercial operations at TransWorld. I am also a member of the Board of Directors of the Islamabad Chapter of TIE (The Indus Entrepreneur’s Association), the world’s largest nonprofit association focused on promoting entrepreneurship.

Operations and History of TransWorld

It is an alternate international carrier which was established as part of the government’s deregulation policy. Before 2002, there was only one nationalized carrier called PTCL for any sort of international connectivity including long distance calls or internet connectivity. The government wanted to encourage competition and before it granted licenses to ISPs and other voice operators, our shareholders won a license to setup this international carrier business after some competition. The principle stake holders in our company are Orascom Group and Saif Group. A major investment group from the Sultanate of Oman has also invested in TransWorld. We have built a submarine cable network under the sea which connects to all the major cable systems of the world for data traffic and phone calls anywhere in the world. In just 4 years we have achieved tremendous growth and have a major market share in broad band connectivity and data services. All the ISPs and GSM operators of Pakistan are now our customers. Almost all voice operators and Internet Service Providers other than PTCL, are getting their international connectivity through our infrastructure.

TransWorld is a B2B company and not weighed down by the heavy employee count required to service the consumer sector. Our President, Kamran Malik has extensive previous telecommunications experience working in companies such as Telstra, the Australian Telecommunication giant. We are also fortunate to have some very prominent names associated with us as advisors and consultants. We have about 150 people on staff, the majority of which focus on engineers and customer support functions.

Our entire network infrastructure is based in Hawks Bay,near Karachi where the cable landing station, internet exchange and a telco grade data center are located. Our sales offices are in Karachi, Lahore and Islamabad but through these offices, we can service most major cities in Pakistan.

Current times are challenging for a number of reasons. There is a global stalemate on economic growth also effecting Pakistan at some level. The security situation and dollar devaluation also damages us because most of telecom operators have their costs in dollars and they are trying to recover them in Rupees. On the other hand their prices are decreasing because of competition. Despite these challenges, the telecom policy has been a success so far in terms of attracting investment. Many foreign companies have entered Pakistan and establishing their infrastructures in Pakistan and that is the reason we have one of the largest tele densities in the word (more than 100 million GSM users and about 2 million internet users). With the emergence of domestic market focused content, improved quality of service and arrival of 3G technology, there is still growth to come in the telecom sector.

The government has done a fair job in setting up the telecom policy that has resulted in the telecom infrastructure investments. However, there is always room for improvement. Some people will argue that too much competition is also not healthy for business and the industry is ripe for consolidation; but this has to be balanced with the realization that without competition industries cannot evolve and grow. I think most people will agree that it was a progressive step when the government said goodbye to monopolies.

The 3G licenses have been announced by the government. Once the investors start gearing up their infrastructure for 3G, it will likely cause an explosive growth in bandwidth usage. There is also the potential of transit trade of handling the connectivity requirements of Afghanistan and Central Asian States.  Fortunately, Pakistan has the advantage of being strategically located for this business. Karachi for instance, is a better place for a regional internet hub as compared to Mumbai and even some places in the Middle East. Its location in the Arabian Sea makes it an ideal choice for a communication gateway to China, Iran, Afghanistan and Central Asian States.

No, currently there are only two companies in Pakistan that operate an international submarine cable network. PTCL is our only competitor in Pakistan.

Our business model is slightly different than PTCL. Most of the capacity PTCL is bringing into Pakistan is being consumed by PTCL itself. Most other companies prefer TransWorld over PTCL because our network is newer and we have a proven track record of being more customer responsive. We also do not compete with our customers like PTCL. If we exclude the capacity PTCL uses itself (which is a huge number), TransWorld is faring better in the market today than PTCL.

Internet gives access to content on servers anywhere in the world. If you want to browse a particular website or get content from a particular location, your computer ultimately connects to the servers of the world through satellite or underwater cables. Connecting through satellite is very expensive so the carriers prefer undersea cable communication. Most of the world’s connectivity is carried out through undersea cables. This is how countries are connected with each other internationally. Initially, Pakistan was connected with the world through two cables of PTCL but now TransWorld also has a cable network that connects Pakistan to major regional internet hubs. From these hubs we have made partnerships with major cable operators and can cover the globe. Total data traffic of Pakistan is about 70 to 80 giga bytes. The TransWorld cable is called TW1 and has an overall capacity of 1.2 tera bytes which is enough to satisfy all of Pakistan’s need for atleast the next 2 decades.

Voice connectivity is now a mature and crowded market in Pakistan. Some people say that it is not profitable for new investments anymore but there are many other aspects of this market yet to be captured.  Voice is now integrated with internet; people have started using internet over phones, so investment opportunities have increased with that. People have begun using phone for new applications like mobile banking, location tracking, facebook apps, etc. A market of 100 million cell phone subscriber customers has huge potential and will definitely attract new investments as people come up with new ways to add value and extract revenue from the bulk community created by these users.

On the other hand, one has to realize that broadband internet market is still relatively new to Pakistan. People are still finding reasons why they should buy a computer to connect to the internet. As computer costs go down, newer tv sets become pre-equipped to handle internet, and useful internet applications emerge this market is also expected to grow dramatically. For example internet becomes more attractive when people can use it to pay their utility and other bills, update their licenses online, pay taxes and perform everyday functions that otherwise would result in significant travel and dealing with queues. People can interact with like minded people in internet communities and buy their entertainment content from specialty app stores online. Teaching in prestigious city schools and universities can be replicated online to rural areas. Projects are underway through which specialist doctors residing in city hospitals can also advice patients in rural areas with the help of internet. The development of urdu content is expected to be another driver of growth for broadband adoption. These are only a few examples highlighting that investment potential in both data and voice sector of Pakistan is possible and probable.

When industry as a whole grows, there are always opportunities for small investors. For example, small investors can team up with software engineers to come up with new internet applications which provide solutions to people’s everyday problems or bring new value into their lives. Whenever these products are successfully sold in the market, it will create new jobs and benefit the economy in many different ways.

One has to believe in oneself. Small investors should understand that they can end up in a better place in life if they take risks and pursue their dreams. If you have an idea, go after it because if you don’t you’ll always feel unfulfilled. The safe path is not always the best path. Most people, who take the decision to become an entrepreneur, usually turn out ok and are usually happy with their lives. The time in which I started my own company in US was one of the best times of my life. However my current job is also very fulfilling as I am able to leverage a bigger infrastructure and see the impact of my actions onto the market much quicker.

It is an interesting time for us as we are in a process of evolution. The last 3 years were about getting market share. We have proved that we can provide a better service than our competitor. We have achieved most of our targets in the first phase. Now we are going in to deliver new value added services to our customers. Earlier this year we launched MPLS services aimed at the corporate customer who has extensive international connectivity requirements. Last month, we inaugurated a state of the art Telco grade data center.  We are looking at a few exciting new opportunities in the international connectivity market and will continue to add new products and services.

Pakistani market in next 5 years

The telecom industry has tremendously grown in the past years and a good basic infrastructure has been established in the country. Now it is time to focus on better service quality and bringing more useful content to the consumer. In the next 5 years, there will be more fiber connectivity in homes as well as greater proliferation of mobile connectivity. Infrastructure will be further improved in the coming years. The world is now moving away from books, post office and TVs. In the coming years, more people will use smart phones and tablets for managing their everyday routines; internet and TV will be merged together and there will be more applications and all manner of new and directly useful content available for customers in the internet cloud. Telcom companies will fight with each other and offer entertainment and all manner of differentiated content to entice customers into their own internet based communities. The bulk of their revenue will come from advertising and selling services from within the community; resulting in lower and lower connectivity costs to the consumer.