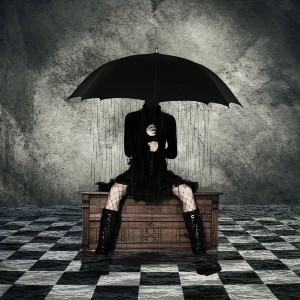 An important aspect of personal finance management is “savings”. We are constantly advised to save money for rainy days. Most people consciously try to save by keeping aside some money from their monthly income. Some of the key reasons why people opt for saving include:

Keeping money aside for emergencies can be beneficial for protection against unforeseen expenses. In the event of an unfortunate emergency such as an urgent medical treatment or car repair required due to an accident, your saving can be significant in such circumstances as the money will be readily available when required.

People who have been employed through the greater half of their lives, prepare themselves for their retired life where their mainstay source of income (their salary) will not be flowing on monthly basis. For times like these, people tend to save so that they may have a substantial amount of funds kept aside.

In our culture, a very important aspect of financial independence is ownership of a house. It is a financial milestone which people want to achieve not only for practical purposes of living under an owned roof but also from an investment point of view. The expectation behind this saving is that the value of the property is bound to increase in the future and therefore a wise investment of savings. A similar thought process governs people’s mind when saving money to invest in gold and/or foreign currency.

4. Vacations or other Luxury Items:

Taking some time off to enjoy a relaxing vacation with family can be substantially expensive especially if one plans to travel abroad. Saving in advance for an upcoming vacation will ensure that the financial details are handled smoothly and cash flows of daily expenditures are not disrupted. Similarly, indulging yourself or your loved ones can dent your pocket. This situation can be avoided if one has kept aside some money in anticipation of a birthday, anniversary etc.

Some people have a long term saving horizon. They are looking to save some money and invest it into their children’s future. This could be for their college education, especially if the parents are planning to send their child to a foreign university. Furthermore, in our society it is also the desire of parents to host a memorable wedding for their children. A number of households start saving for this event very early on. For both these reasons, usually savings are done in the form of mutual funds, insurance policies and commodities like gold which present a relatively stable value in the future. Saving in cash is usually not preferred when saving for these events since the money will lose value against inflation therefore, it is preferred to invest money where it will gain some profit in the future.

The reasons for saving cited above can be described as lifecycle needs of an individual, although the term “lifecycle needs” is popularly used to describe the stage at which a business stands and the relevant needs associated at that stage, the same concept can be applied to individuals. People save when they are young, to meet the future financial obligations. It can be assumed that each individual therefore, after meeting the financial necessities tries to keep a certain amount of funds aside for savings.

InPakistan, the more popular avenues of savings on a personal level are investing in gold, investing in foreign currency, placing money in a term deposit or savings account at a bank, investing money in savings certificates and bonds. Each of these savings options have their merits, however it can be realized that the easiest way to save money is to place it in a bank account. The reason for asserting this channel as the easiest is as follows:

Along with the merits of savings at banks, the demerits must be mentioned as well:

Although there are other means of savings available which include property, foreign exchange and commodities, placing funds with banks remains a popular avenue. Let’s try and establish the link between the benchmark interest rates (a tool of the monetary policy to manage the economy) and the psyche of savers towards term deposits (fixed deposits, where savers money is placed with the bank at a specified interest rate and for a specific duration).

Taking a bird’s eye view of the banking sector will show that the share of people saving money in term deposits with banks is decreasing.  Table[1] below illustrates this trend mapped from June 2008 to December 2011.

To understand the underlying factors of this trend, it is important to keep those economic variables in mind which affect savings. The most important of these factors is the movement of the benchmark interest rates. Benchmark interest rates announced by SBP in its monetary policy directly impact the deposit rates offered by banks on their deposit products, both savings accounts and term deposits. Term deposit accounts are more vulnerable to these policy changes because banks need to hedge their deposits to counter the impact on their profitability. Since term deposit rates are locked for the entire duration of the period, a decrease in benchmark rates during that period, will make term deposits booked earlier unprofitable for the bank as the bank will be earning a negative spread in these deposits (paying out more than benchmark rate to the customer as the rate was linked to the previous benchmark interest rate). It is observed (in the chart below)[2]that following every benchmark rate cut, the rate of investment of funds in term deposits (fixed deposits) goes up. 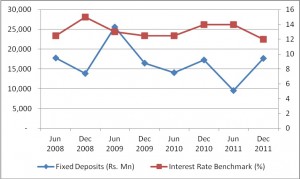 The reason for this trend can be interpreted as market sentiment. Let us look into some of the main data points above to understand this trend. In June 2008, the benchmark interest rates were rising. Corresponding to this, the volume of fixed deposits declined. This can be attributed to people withdrawing their funds from term deposits which were previously booked at lower rates. In December 2008, the benchmark rates began to decline. Therefore, anticipating higher profit rates in the present as compared to the future, investment in term deposit began to increase due to market anticipation of lower rates in the future.

Although multiple factors come into play when observing the declining trend of saving in term deposits (fixed deposits) a key factor as shown in the above analysis is the declining benchmark interest rate.