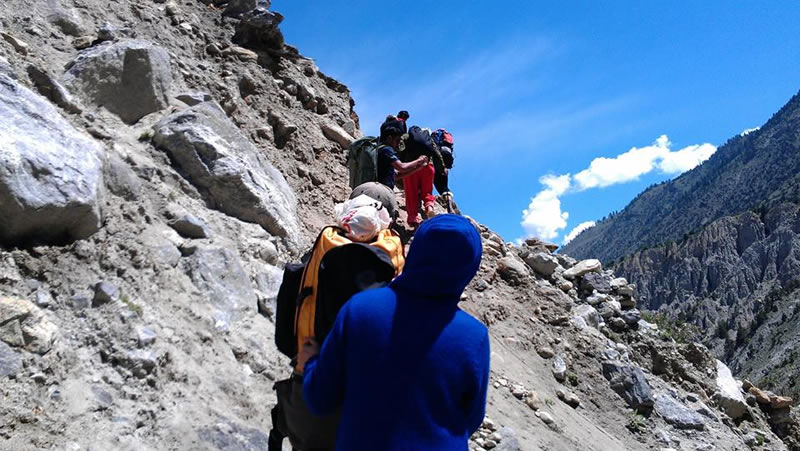 People who love adventure and trekking, there are numerous trekking areas in Pakistan. Some of them are for experienced climbers and there are some where a common man can go. We have experienced and shortlisted some of the best treks of Pakistan where anyone can go without experience. 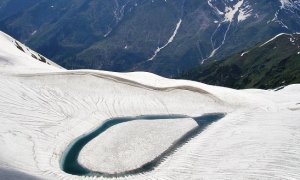 Aanso Lake
Located in the Mansehra District of the Kaghan Valley in Khyber Pakhtunkhwa, the Aanso Lake is considered to be one of the most attractive lakes in the world. Being discovered coincidentally by the pilots of the Pakistan Air Force, the lake resembles the shape of the human eye with the central island being closely similar to the iris and the ridge resembling an eye brow, which is why it is named ‘Aanso’ which means teardrop in Urdu.
The lake does not offer any area for residence due to which tourists, against the recommendations of locals, are occasionally found camping in this cold mountain areas surrounding it.
Two different routes allow one to visit this lake, the first one being a steep, 7 hour route from the Saiful Mulook Lake, with the route being covered with snow mostly throughout the year. The ideal time for trekking is during summers, in the months of July and August, in the morning so that trekkers and tourists are able to return to their areas of residence before sunset. The facilities of guides and horses are also available for the smooth flow of the journey. 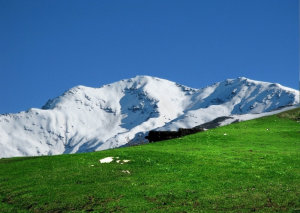 Musa ka Musala
Standing at the intersection of the Kaghan and Siran valleys in the Himalaya at an altitude of 4080 meters, is located the Musa Ka Musala, which means ‘Moses’ Mat’. This region has a number of different stories associated with it, some of which state that it is named after a local shephard named Musa while others attribute it to the Propher Moses, with on ongoing debate regarding whether this area is a peak or a plateau. A shrine of different stones, marked with colorful flags is also located at the top.
The most commonly used routes for trekking in this region include Jacha, Bikhi, Jappar and Choti Ziara Gali, amongst many others. This mountain can be viewed from places as far as 200 kilometers away, with the region depicting an exterior of being a prayer mat which is what led to it being named as Musa ka Musala. Its peaks are filled with snow throughout the year and this mountain is considered by the locals as an Islamic shrine known as Ziarat. 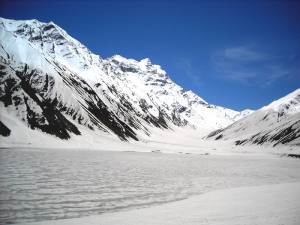 Malka Parbat
The ‘Queen of the mountains’, known as Malka Parbat by the locals, is the highest peak present in the Kaghan Valley, located towards the south of the Saiful Muluk Lake. This mountain is accessible from Naran through the side of the Saiful Muluk Lake, as well as from Batakundi through the Dadar Chitta Glacier. Three peaks form the Malika Parbat, one being present towards its north, the other known as Malika Parbat Cresta and the third being located towards the south.
Imran Junaidi climbed the northern peak in July 2012 and is said to be the first Pakistani to have done so since the mountain is not deemed fit for climbing by the locals due to its sheer steepness and other risks which are present there. Others have also tried trekking this range however one of them lost their life whilst climbing down the slopes of the southern peak, hence proving how difficult and dangerous the journey is. 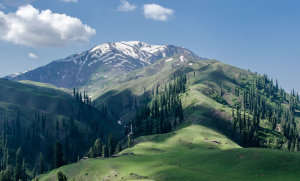 Makra
Located in the region of Hazara in the Himalayas, Makra is 4000 meters high, making it a difficult peak to hike on due to the steep slope and snow storms in the region which have been the reasons behind the occurrence of many deaths of tourists who attempted at climbing it. However, despite these complications, the Makra peak offers a beautiful view of Hazara and Azad Kashmir. 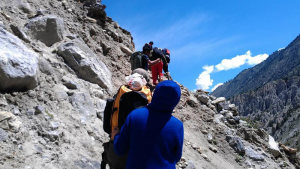 Fairy Meadows
Also known as ‘Fairy tale meadows’ the Fairy Meadows are locally called ‘Joot’, being basically grassland near Nanga Parbat, located in Gilgit Baltistan. It is present at an attitude of approximately 3,300 meters above sea level and serves as the starting point for the trekking route on the Rakhiot side of Nanga Parbat. These meadows have been declared to be the National Part of Pakistan by the government in 1995, with locals using this as a camping site since 1992. 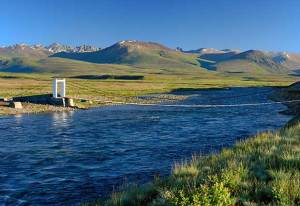 Deosai
A wilderness without the presence of any trees, located at the south of Satpara in Skardu is the Deosai National Park, which is basically a plateau located between central Karakoram and the Himalayas. Deosai is known to be the second largest plateau in the world, covering approximately 3000 kilometers of area and being renowned for its unique flowers and picturesque view of flowing streams and snowcapped peaks.
Being established in 1993, the main purpose of the park was to secure the habitats and lives of several animals such as the Himalayan Brown Bear, whose existence was at a risk due to constant attacks and threats from hunters in the area. The plains also host a number of resident and migratory birds along with different high altitude animals.
Deosai literally means the ‘land of giants’ and can be accessed through Skardu, being visited by tourists during the summer season, when its plains are covered by flowers and butterflies. The most breathtaking area is the Sheosar Lake in the region which is situated at a height of approximately 4142 meters, the name of which means ‘blind lake’, offering tourists a beautiful view and relaxation through the peace of the surrounding areas. 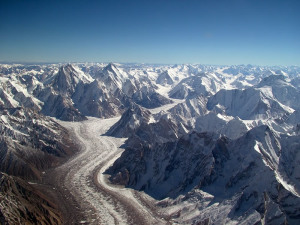 Baltoro Glacier
Located in Baltistan, the Baltoro Glacier is known to be one of the longest non polar glaciers in the world, running through the Karakoram mountain range. This glacier gives rise to the Shigar River, which is a tributary of the Indus River with the union of the main glacier with the Godwin Austen Glacier being known as Concordia, providing an ideal trekking destination for incoming tourists.
The trough of this glacier is very extensive since it allows icefalls from small valley glaciers to meet the trunk of the glacier which has carved patterns on the rocks surrounding the area. Depressions are formed by the moving glacier which serves as basins for other glacial lakes present in the region. It takes almost 3 days walk from last village by the name of Askole. Further 3 days will take you to base camp of K2.