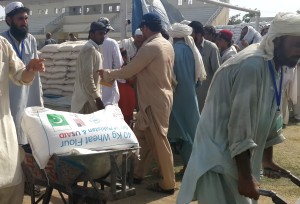 The united states over the years has showed great commitment to fulfill the basic needs of the citizens of Pakistan. One such attempt has recently been made by the United States Agency for International Development (USAID) in the shape of an additional $8 million to help out the internally displaced people (IDPs) from the Federally Administered Tribal Areas (FATA).

The Twinning Program is a partnership between the Government of Pakistan, WFP, and the international donor community through which wheat donated by the Government of Pakistan is transformed into fortified wheat flour and distributed in the most vulnerable communities.  Donor funds are used to cover the costs of milling, fortification, storage, transport, and distribution of the wheat flour.  This new commitment by the U.S. government will enable WFP to transform approximately 38,000 metric tons of wheat into fortified wheat flour, providing more nutritional food for the IDPs over a two-month period.

Since the Twinning Program began in 2013, the Government of Pakistan has taken a leading role in the partnership by donating 201,000 metric tons of wheat to the WFP.  With this contribution of $8 million, USAID is now the largest international donor to the program, providing a total of $31 million in support – enough to fortify 60 percent of the wheat donated by the Government of Pakistan.

“The United States’ commitment to the Twinning Program is a demonstration of our support to the internally displaced population from the FATA and the incredibly important partnership between the Government of Pakistan, WFP, and the international community,” said USAID Acting Mission Director, Nancy Estes.