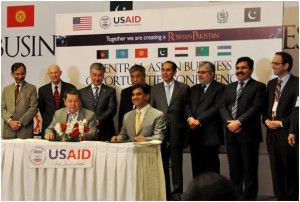 The United States displayed its support for Pakistan’s economic growth at the Central Asian Business Opportunities Conference held in Islamabad from April 14- 16.  Major effects of the Conference included the signing of six Memoranda of Understanding (MoUs) between Pakistan, Afghanistan and Central Asian businesses to support regional trade and investment as a means to facilitate regional economic growth.  The conference was sponsored by the U.S. Agency for International Development (USAID) and co-hosted by Pakistan’s Ministry of Commerce and the Rawalpindi Chamber of Commerce and Industry (RCCI).

More than 250 private and public sector participants from Pakistan, Afghanistan, and the Central Asian Republics of Kazakhstan, Kyrgyzstan, Turkmenistan, Tajikistan, and Uzbekistan united to seek new business opportunities and pursue greater regional coordination of trade and investment.  The spotlight of the Conference was on agricultural products, textiles, leather, pharmaceuticals, and construction.  The private sector also informed of its plans for increased intra-regional participation in trade fairs.

Focusing on the significance of the conference in helping businesses across Central Asia, Afghanistan and Pakistan deepen economic and trade relations, USAID’s Mission Director Gregory Gottlieb commented, “This Conference was another significant example of the United States’ efforts to enhance regional trade and economic integration, both within and outside the region.”

The five Central Asian Republics, along with Afghanistan and Pakistan, have a market population of 289 million and a GDP of USD 594 billion.  Nevertheless, physical and other barriers to trade and investment avert the region from understanding its economic potential.  Speaking the closing session, the President of the Pakistan-Afghanistan Joint Chamber of Commerce and Industry, Zubair Motiwala accredited the accomplishments of the conference by saying, “Making regional trade successful is in the interest of both Pakistan and Afghanistan.  Opening doors for trade in the region will benefit traders in all Central Asian countries resulting in economic growth in the whole region.”

The United States immensely promotes Pakistan’s commitment on expanding regional trade.  The United States has financed the construction and rehabilitation of more than 900 kilometers of roads and highways in Pakistan, including the four major trade routes between Pakistan and Afghanistan.  The United States is also in favour of the Afghanistan-Pakistan Transit Trade Agreement, regional business networking events, the Turkmenistan-Afghanistan-Pakistan-India (TAPI) natural gas pipeline, and the Central Asia-South Asia (CASA-1000) regional power transmission project.