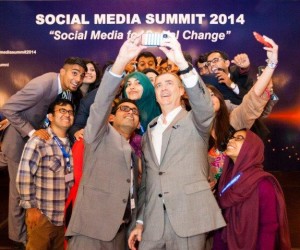 The Pakistan-U.S. Alumni Network (PUAN) and the Progressive Youth Forum (PYF) received more than 300 attendees to the 2014 Social Media Summit on March 29-30, 2014, in Islamabad.  Abdullah Dayo, who is a U.S. exchange program alumnus, social media activist, and general secretary of PYF, planned the summit, which is financed by a small grant from the Pakistan-U.S. Alumni Network (PUA N).  U.S. Ambassador Richard Olson welcomed the summit attendees during the March 29 opening session.

“You have an extraordinary capacity to make a positive impact in your communities and your country—and social media is a powerful platform for your voices to be heard,” spoke Ambassador Olson, followed by taking a “selfie” photo with the attendees, which was then tweeted from the U.S. Embassy’s twitter account @usembislamabad.

“Social Media for Social Change” was chosen as the theme for the two day summit.  Attendees present there, including journalists, bloggers, social activists, students, and U.S. exchange alumni were to speak on their experiences and interchange ideas on a range of topics.  Panel sessions will pay attention on social media for youth activism, peace promotion, women’s empowerment, entrepreneurship, digital storytelling, and the power of social media on the changing landscape of journalism.

Amongst the speakers, renowned journalists, social media and civil society experts, and entrepreneur are present. The summit, which will also have Skype sessions with international social media experts, will execute in a group exercise: a debate on the future of social media in Pakistan.