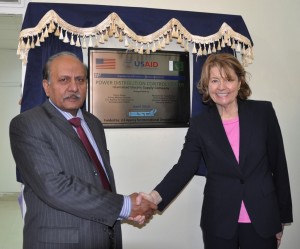 The PDCC, formed with the aid from USAID, allows IESCO to monitor the flow of power in real time, enabling technicians to lessen unplanned loadshedding in the region.  “This control center is enabling IESCO to monitor the electrical power flow throughout the region by interpreting and displaying data from more than 1,000 meters installed throughout each of their 79 grid stations.  This system provides accurate information to both IESCO and the National Power Control Center to so that they can compare actual loads against established targets in real time,” spoke Estes.  She further stated, “The United States and Pakistan are working together to help Pakistan meet growing energy demands and implement the necessary reforms to improve efficiency of the energy sector to accelerate economic growth.  These efforts include improving the electricity distribution grid.  The United States Government is working with all ten of Pakistan’s public power distribution companies to improve their operations, reduce financial and power losses, and ultimately to ensure that consumers have a more reliable electricity supply.”

The PDCC is part of the National Power Control Center (NPCC) which also got similar USAID support to focus on energy shortages on the national level.  By installing over 9,000 smart meters in 741 grid stations in all ten government owned distribution companies, USAID’s Power Distribution Program (PDP) supports the Distribution Companies (DISCOs) and the NPCC in regulating the flow of electricity, considerably reducing unscheduled load shedding.

The steps taken are considered as a part of a broad U.S. government energy sector support program for Pakistan that intends to upsurge the country’s electricity output to facilitate more than 16 million people.  The expected aim is the addition of 1400 megawatts to Pakistan’s national power grid by the end of 2014.  As part of the assistance program, USAID has financed renovations at Tarbela, Jamshoro, Mangla, Guddu, and Muzaffargarh power plants, aided the completion of Gomal Zam and Satpara dams, and lend a hand to expand power distribution throughout Pakistan.  With the help of this plan, an addition of more than 1000 megawatts of power to Pakistan’s power system has already been accomplished.