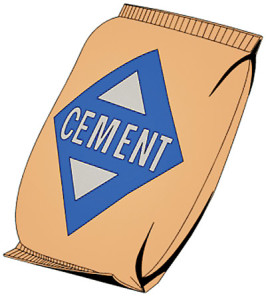 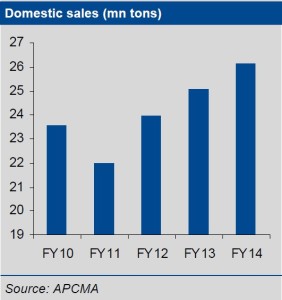 As per All Pakistan Cement Manufacturer Association (APCMA) dispatches in June 2014 have clocked in at 2.53mn tons, depicting a sharp increase of 14.3%YoY. Note this is the highest recorded monthly sales figure for the month of June as well as the highest monthly sales figure for FY14. The strong growth can be attributed to 1) Pre-Ramadan rush of the private sector to complete projects, 2) a more concerted effort from the cement industry to boost domestic sales before the fiscal year ends and 3) peak demand from the Rawalpindi-Islamabad Metro Bus project. After incorporating the June 2014 sales figure, FY14 domestic volumes arrive at 26.13mn tons (highest local sales figure that the industry has ever registered), up 4.3%YoY. On a MoM basis local sales in June jumped 9.7% as shortage of labor had affected cement dispatches in May.

Exports on the other hand grew at a more subdued pace (+2.9%YoY) in June 2014 to 0.69mn tons. However, on a MoM basis exports dipped by 9.7%. Although the breakup of export sales is not available yet but taking cue from 11MFY14 sales figures where Pak export sales to Afghanistan trimmed by 17%YoY, June sales are likely to have witnessed a similar fate. For full year FY14, total cement exports amounted to 8.13mn tons, down 2.9%YoY. 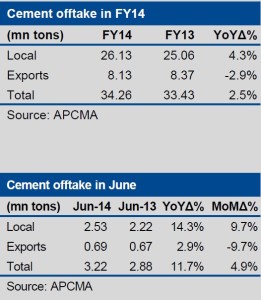 We expect a similar volumetric trend in FY15 where domestic sales are likely to grow at 4-5% with key government projects like 1) Rawalpindi-Islamabad Metro Bus project (expected to be completed by December 2014) and 2) Khanki barrage anticipated to boost domestic growth in 1HFY15. Meanwhile construction for Bhasha Dam is anticipated to commence in Oct-Nov with peak demand likely post the winter of 2015. Exports on the other hand may witness another lackluster year with industry players not expecting the Afghanistan market to recover in FY15. We remain positive on the Pakistan cement space given strong earnings outlook driven by firm cement prices and steady uptick in cement volumes. We continue to flag DGKC as our preferred play (TP: Rs101) within the JS Cement Universe given the undemanding valuations of the stock where it trades at FY15F P/E of 6.2x vs. market’s FY15F P/E of 8.9x.