The Automobile market is the one which is known to be the most killing factor in everyone’s routine life, at least in Asia. Today, we find out how these killing factors are nothing in other parts of the world as we compare different automobile markets all across the globe.

Pakistan is home to many automobile companies as Toyota, Honda, Suzuki, Nissan and now even Porsche and Audi. But their price ranges vary distinguish-ably from region to region.

With the advent of Audi and Porsche showrooms in Pakistan, the demand for luxury cars may have been increased but they remain far more expensive when compared with the global automobile market. Of course, fuel prices, currency value, life standards and taxes heavily influence them.

Talking about the Global automobile market, let us have rounds up on how automobile costs fluctuate throughout the globe.
For instance, one would be actually stupefied with disbelief how a simple Mercedes Benz (C class) would amaze one with its diverging cost. According to official company websites in compliance with the regions in which they operate we see the following chart. 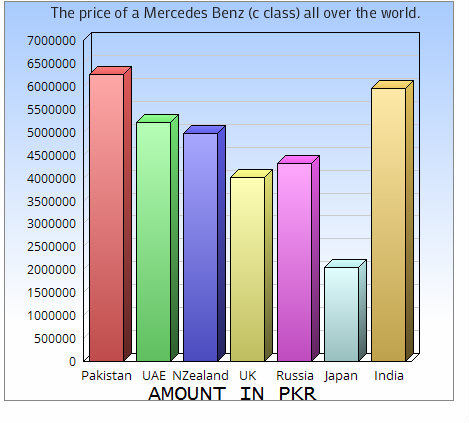 When we compare vendors in the global automobile market, there is a bombshell range here. Porsche prices start at about $ 46,475 while Audi would start from $70,000. A Ferrari would range from $ 188,000 and a Bentley would start from $ 180,195.A Tesla owner would easily come around $ 101,500 to value from and so on would other auto distributors.

The average cost of each vendor varies in each country: 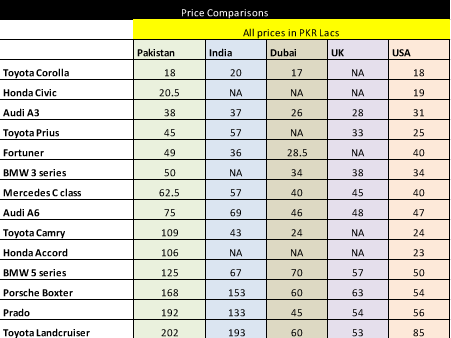 Hence, from the above chart we can clearly see that if a person in Pakistan wants to buy such luxury cars as Porsche, Land cruiser, Accord or BMW one needs to have a good sufficient amount in order to be able to afford it. While a person living in Dubai, UK or USA could afford them at half the price. Even Indians can afford it at 3/4’s of the price in Pakistan. This reality comes as a surprise to everyone since the average income of a Pakistani is just about $ 4,602 per annum while that of UAE and India is $67,674 and $5,418 respectively. The duty on import of vehicles vary as 10%, 4% and 60% in Pakistan , UAE and India respectively.

Coming back to how local vendors in Pakistan have increased their commodity ranges, we have a high change here too. Mehran VX was increased by 47.73%, fixing the rate at Rs 5,20,000 from Rs 3,52,000. Indus Motors increased their Corolla prices from 46.48% to 69.13%. Most of the hike occurred at Honda Atlas which increased up about thrice the rate. It increased various models from 26.19% to 61.63%.
The Global Automobile Market continues to evolve over time with respect to regions, factors and prevailing eras as we continue to see wide contrasts all over the world.  Even though the prices are high in Pakistan and there is a richer community affording it her yet the number of official vendors remain less as compared to Dubai or India. The number of brands available in Pakistan is a significantly low number of 11 with total 52 car models. In Dubai there are 12+ car brands with more than 162 models while in India there are 200+ models with the number of brands exceeding 35.

India has an awful lot of cars to choose from 1-20 lac range while Pakistani’s have only some few options. 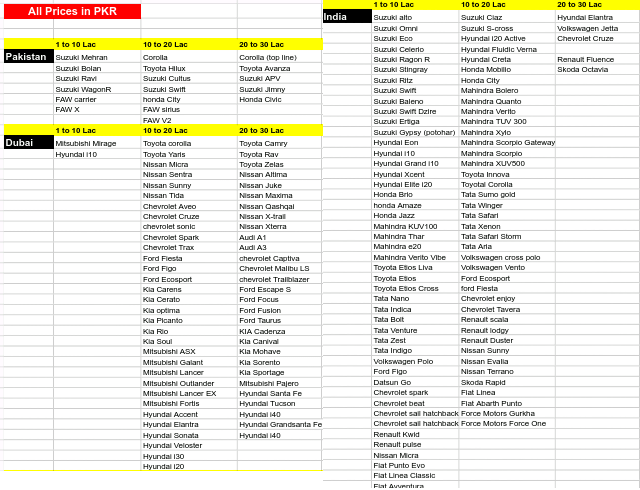 Unable to do anything about yet we do enjoy those luxury cars at sometime in our lives.