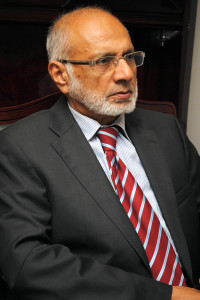 Hussain Lawai, President of Summit Bank speaks about the banking sector of Pakistan and the associated problems and opportunities of this industry.

Please tell us about your educational and professional background?

Well, I did my MBA in 1967 from IBA and joined my family business in Chitagong, former East Pakistan, now Bangladesh. On January 8, 1972, I joined the Muslim Commercial Bank as an officer and in 1974 was promoted as head of the human resource department. In 1978, I established the Union Bank of Middle East which later merged into Emirates Bank then Saudi-Pak Bank, which now is Silkbank. In fact, I had bought the existing heritage building of Silkbank at Rs 8.6 million which is now worth over Rs 2 billion.

Another bank which I established in 1987 was the Faisal Islami Bank. In 1991, I was appointed the president of MCB Bank. In 2008, I got affiliated with Arif Habib Bank which today is the Summit Bank.

What is the current situation of the banking sector?

The banking industry’s overall performance is very good. The only disorder I see is the banks’ Non-Performing Loans (NPLs) which account for 17 percent of the total outstanding loans. Bad debts are on the higher side and something we need to address through tuning or improving the country’s judicial system so the cases of bank loan defaults can be heard in a short period of time. Presently, on average a case takes 15 to 20 years to be resolved through the banking courts.

The sector is growing well with the banks launching new products and the depositor getting an attractive interest rate. The emergence of mid-sized and small banks has increased competition which has made the big banks, like Habib Bank Limited, giving 7 percent mark-up to the depositors.

This has, in fact, changed the marketing strategy of the banks. Branchless banking has grown well in the country. Products like HBL Express, Omni of UBL and easy paisa of Tameer Bank of Finance have allowed the banking sector to penetrate into the masses.

Then we have the fast growing Alternative Delivery Channels (ADCs) that, through the usage of ATM cards, internet banking etc, have given a push-ahead to the banking sector during last five years.

This is because of these positives that the banks up to December 31, 2012 were able to maintain deposits worth Rs 6.8 trillion while their advances portfolio amounted to Rs 3.6 trillion.

What are the major issues the banks are facing given the State Bank’s monetary and regulatory framework and business conditions?

As I said earlier, 17 percent NPLs happens to be the biggest challenge, the banks are facing today. This adversely affects the banks’ capacity and even the will to finance private businesses, especially the Small and Medium Enterprises (SMEs). The current higher infection ratio for financing in the SME sector is 36 percent against 3 to 8 percent of the world which makes the banks risk-averse towards private lending. It is considered to be the engine of growth and employment all over the world.

Law and order is an important issue haunting this sector. Abroad, banks are not supposed to deploy security guards, as we see in Pakistan and perhaps India. We are paying taxes so that the government can provide us with security. Unfortunately, this is missing.

What measures have you taken to ensure security?

We have deployed two guards at each of our branches and have also installed highly sophisticated electronic security equipment. To deal with a robbery attempt, we have a “panic button” near the cashiers and the branch managers which when pushed, will alert the nearby security company to inform the police about the incident. The button is hidden in such a way which the cashier can press with his leg. This system has worked having already foiled a couple of robberies at Tariq Road branch of Bank Al-Falah.

However, a challenge which banks are coping with is the fast deteriorating human resource. We need to work hard to have well-trained human resources. The ever deteriorating law and order has led to a great brain drain from Pakistan. The new government, we hope, will effectively address the menace.

The State Bank as a regulator is playing two different roles: regulation and the development of banking sector. The central bank always listens to us when we approach them. Their contribution on the development side, like that of the branchless banking, is better.

Can you describe Summit Bank’s operations in Pakistan?

This bank came into being with the merger of three banks: Arif Habib Bank, Atlas Bank and My Bank. Today, we have an expanded countrywide network of 187 branches. Having a workforce of 2,500 personnel, we have a deposit base of Rs 98 billion. Our advances to the borrowers stand at Rs 52 billion. We are rated at 7 by the central bank in terms of home remittances. Our bad debts amount to Rs 22 billion of which we have recovered Rs 3.6 billion last year, a trend we hope to continue this year as well. Our total investment portfolio is around Rs 46 billion.

We plan to further expand our branch network this year, 2013. We are planning to open 15 new branches in Gilgit Baltistan, Punjab and in the interior of Sindh.

What is the target audience of Summit Bank?

Trade financing is our prime focus at present so that the business community can be facilitated in financing the foreign and local trade. For this purpose, we recently have launched two products: Summit Current Classic Account for the businessmen and Young Bee for the children.

Under the Classic Account, our business account holders can get a hospitalization cover of up to Rs 0.25 million in case of medical emergencies like heart attack etc. Young Bee has been launched in collaboration with McDonald’s in which we give debit cards to the youth to make them financially independent. Our card also entitles the holders to a free meal at McDonald’s outlets.

Do you have any Islamic Bank Branches?

We are about to start Islamic bank branches soon and have filed an application for the State Bank’s permission. Having trained the staff, we have appointed Mufti Najeeb as our Shariah advisor.

In the first phase, we will open eight Islamic bank branches across the country. By 1stof October, we hope to make the new openings after the regulator’s permission.

What has attracted you towards Islamic Banking?

The remarkable growth of Islamic financing in Pakistan! Given its great 30 percent annual growth rate, against 12 percent of the conventional banks, we want to go to this fast growing segment which is profitable.

What is the market share of Summit Bank in Pakistan?

Presently, we are two percent of the total banking industry. We are very small compared to the big banks.

What suggestions would you like to give to the State Bank and the Government?

Ideally, this rate in Pakistan should be 7 percent. But, economists on the SBO Board tend to make it compatible to the prevailing inflation rate which also currently stands at 7.5 percent.

What is your opinion on the banks risk averse behavior in the recent years?

Well, the banks were going for risk-free government securities because the previous government needed money. Naturally, if you get a risk-free customer why would you go to the private sector? If there is no demand from the government, the banks will certainly go after private borrowers.

What I propose is the government should not solely depend on the banks, the donors and multilateral agencies to cater its budgetary needs. The people of Pakistan have huge resources which can be tapped through the issuance of government bonds at an attractive interest rate. It can be subscribed very easily. Further, such bonds backed by 4-5 percent mark-up can be issued for overseas Pakistanis. This step will enable the government to easily plug the deficit.

How do you categorize corporate, investment and consumer banking in terms of profit?

There are four segments in the banking industry: corporate, commercial, SME and consumer. One side of the banking is depositing and lending and the other one is called investment banking or corporate financing. We have separated the two.

Apparently, the consumer and SME banking with 36 percent rate of return are more profitable but then comes the 7 percent NPLs disadvantaging these two segments. At the same time, the low infection ratio makes the commercial and corporate banking more profitable despite 8 percent return.

How do you rate the different regions in terms of profitability?

In my opinion, Karachi, Lahore, Faisalabad, Silakot and Multan stand to be the country’s most profitable centers. These actually are business hubs. Islamabad, Quetta, Hyderabad, Peshawar, Gujrat and Gujranwala are special when it comes to deposit mobilization.

What are the strengths and weaknesses of the financial market of Pakistan?

The strength of Pakistani market is the country’s huge population of 200 million but we also have low banking penetration which is 10 percent. There are 100 million bank accounts in the United Kingdom where the population is only 60 million.

Given the growth potential in Pakistan’s banking industry, be it conventional or Islamic, one can safely say that there should be more bank branches in the country so that more people could be reached.

Has the banking sector in Pakistan reached its saturation point?

There still exists a great gap for expansion in terms of resource mobilization and investment. Housing sector, the biggest, is still untouched. We still have not materialized concepts like personal loan, mortgage, credit cards and so on.

Where do you see the banking sector standing in the next five years?

The current volume of Rs 6.5 trillion deposits will expand to at least Rs 13 trillion in the coming five years. The banks’ profitability will see a healthy trend after an improvement in the infection ration which will be decreased to 10 percent.

What is your opinion on the present situation of small businesses in Pakistan?

Small businesses in Pakistan are going through a challenging phase. The menaces of law and order and energy crisis have plagued them. Given the widely-held hope that the new government of PML-N will successfully cope with these negative factors, one can surmise that these businesses will have a bright prospect.

What are your future plans in terms of expansion, services and products?

We want to expand our branch network to the cities where banking services are under-produced or totally missing. The Karachi Fish Harbor only has one operational bank, National Bank of Pakistan. Soneri Bank has been the lone service provider in Hunza, Gilgit, Baltistan. We plan to launch 15 to 20 branches a year.

The new products include the launching of prepaid cards on a great scale in October this year. Only UBL  is offering such cards on a very limited scale. Committee Bachat Account is another product which we are envisaging. Small groups comprising of least 20 people will be formed who will get the accumulated amount ranging from Rs 0.5 million to 5 million on the basis of a lucky draw. This product will be interest free having various categories. Islamic banking is the service which we are about to offer in the near future.