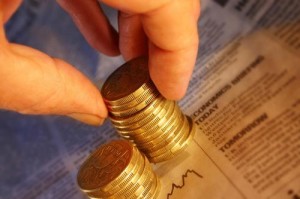 -With 1Q2014 in the bag, lending activity depicts an unexciting picture for the banking sector where growth in credit offtake and deposits remains soft, +1% each to Rs4.1trn and Rs7.6trn respectively.

-Investments, on the other hand, grew by 11% in 1Q2014, clocking in at Rs4.5trn as the government mopped up Rs530bn in the PIB auction held during the last week of March. As a result, banking sector ADR remained at 54% while IDR increased by 5ppt to 59% during the period.

–With the Discount Rate (DR) now expected to remain unchanged till Jun 2014 (JS view) and linking of savings deposits Minimum Profit Rate (MPR) to the central bank’s Repo Rate, we anticipate limited growth in spreads. We maintain our ‘Market-weight’ stance on the banking sector.

Banking spreads recovered somewhat in February 2014 to 6.05% (+7bps MoM while down 13bps YoY) where the same had hit a low of 5.98% (lowest since April 2005) in January 2014. Meanwhile 2M2014 weighted average spreads stand at 6.02% compared to 6.21% in 1Q2013. Going forward, on the back of our expectation that the DR will remain unchanged till June 2014 (JS view), we believe a sharp revival in banking spreads is an unlikely outcome. However, we do not rule out banks shifting their focus on tilting the deposit mix towards current accounts, which allow for lower cost compared to savings deposits where Minimum Profit Rate is linked to State Bank of Pakistan’s Repo rate. We also flag that the active participation of banks during the last PIB auction is likely to provide a boost to banking sector’s NIMs as banks are likely to earn higher yields on PIBs than T-Bills or advances. 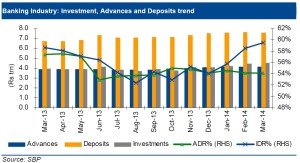 Monetary tightening was eyed as an emerging theme for banks in 2H2013 but the linking of MDR on savings deposits to the DR has proved to be a game changer for the sector. More recently, low inflation numbers (3QFY14 / 9MFY14 at 8.1% and 8.6%) suggests any further monetary tightening is unlikely in the near term. Hence, we build in curtailed growth in banking spreads going forward while recent PIB focus points towards better NIMs in the near term. Eyeing a relatively balanced risk-reward outlook, we remain ‘Market-weight’ on Pak Banks and re-iterate ‘Sell’ on HBL (TP: Rs141) and a ‘Buy’ on BAFL (TP: Rs30).