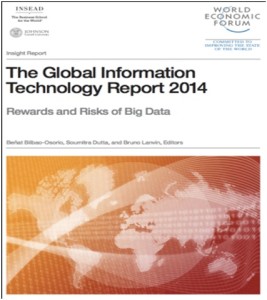 Pakistan assures that technology is affordable for all businesses and individual consumers, announced by the Global Information Technology Report 2014 of the World Economic Forum (WEF).

Lying at the position 111th position among 148 countries, Pakistan’s performance has been comparatively steady on the Network Readiness Index 2014 of the World Economic Forum (WEF), Pakistan lost 6 ranks as compared to 2013.

Pakistan displayed a little improvement on the Business and Innovation Environment pillar by securing the 101 rank as compared to 102 last year. Moreover on the readiness sub index it elevated from 21 in 2013 to 19 this year. The effectiveness of legal system in resolving clashes has climbed up from 109 last year to 112 in 2014. Likewise the competence of legal system has also declined from 97 to 108 in 2013 and 2014 respectively.

“One of the key findings of the report is that Pakistan cannot only rely on ICT infrastructure development to become competitive. Rather, the benefits of ICT can only be fully derived when a country implements a holistic strategy aimed at creating conditions for skills, innovation and entrepreneurship to flourish alongside modern infrastructure” spoke Amir Jahangir, Chief Executive Officer of Mishal Pakistan, a country partner institute of the World Economic Forum.

“One of the primary concerns for Pakistan is the lack of data protection laws, this can have medium to long-term impact on the development of a knowledge-based industry fostering innovation and entrepreneurship, a potential Pakistan needs to capitalize due to its demographic potential”, Jahangir further stated.

The Report displayed fears regarding  Pakistan’s human capital development on the skills pillar to improve performance on the network readiness index as the quality of the education system has worsened from 75 (2013) to 84 this year. An upsetting decline in the performance in math and science education has also been recorded where Pakistan now lies at the position of 104 now from the ranking of 88 in 2013. The report demonstrated serious hard work required by both the public and private sector on the extent of staff training where it has lost 16 points and the country stands at a shocking 128 rank.

Pakistan has revealed improvements in the business and innovation environment pillar, with availability of latest technologies being improved from 83 (2013) to 79 (2014), however, lack of venture capital has dropped 22 points and ranks at 77 this year. Pakistan is also losing control of its local competitiveness advantage on doing business indicators, where No. of days to start a business ranks at 98 and the No. of procedures to start a business at 119 now.

The report focusing on the affordability of technology grades Pakistan as the 10th most affordable cellular serviced country, where as Liberia tops this list with Sri Lanka at 4th, Bangladesh at 5th and India being on 7th globally. Pakistan stands at No. 1 on the Internet and telephony competition globally. Over monthly subscription charges for fixed (wired) broadband Internet service (PPP $), Pakistan ranks at 62 as compared to Sri Lank being the most affordable (among 148 countries), Bangladesh being at 3rd and India at 4th in the region.

When it comes to the businesses usage of technology, Pakistan has shown drastic improvement its indicators, where business-to-business usage of Internet has increased from 116 to 104 this year, similarly the business to consumer usage also raised from the position of 103 from 112 last year.

Regarding the government usage of technology, Pakistan did not enjoy the same level of success since importance of ICT to government’s vision has decreased from 117 in 2013 to 128 in 2014. Similarly, the government was unable to play a significant role in supporting the use of information and communication technologies (ICTs) Pakistan, ranking at 91 from 77 in 2013.

No significant progress has been made in overcoming the digital gap between technology savvy nations and others, according to the 13th edition of the Global Information Technology Report 2014. The stalling of progress is worrying for developing and rising nations, which are at jeopardy of missing out on many positive impacts information and communications technologies (ICT) bring, comprising of increased innovation, economic competitiveness and superior social presence.

Various large emerging economies still struggle with making use of their full digital potential. China (62nd), Brazil (69th) and Mexico (79th) and India (83rd) all drop in the rankings. Nevertheless, countries whose primary objective includes developing their ICT capacity do well, such as the United Arab Emirates (24th), Kazakhstan (38th) or Panama (43rd), which all improved.

With a record breaking coverage of 148 economies this year, the Global Information Technology Report (GITR) report is one of the most comprehensive and accurate assessments of the impact of ICT on competitiveness of nations and the well-being of their citizens.

To measure this, the NRI assesses the preparedness of an economy to fully leverage ICT in terms of:

1. ICT infrastructure cost of access and the presence of the necessary skills to ensure an optimal use Published under the theme, “Rewards and Risks of Big Data”, the report’s Networked Readiness Index (NRI) measures the capacity of 148 economies to leverage ICT for growth and well-being. It finds consistency at the top end of the rankings this year, with Finland (1st), Singapore (2nd), Sweden (3rd), the Netherlands (4th), Norway (5th) and Switzerland (6th) all retaining their positions from last year. The United States (7th) continues its upward trajectory, while Hong Kong SAR (8th) and the Republic of Korea (10th) both climb. The United Kingdom (9th) is the only nation in the top 10 to fall.

2. Uptake and use of ICT among governments, business and individuals

3. Business and innovation environment, and the political and regulatory framework

“Over time, the GITR series has become one of the most respected studies of its kind. It is used extensively by policymakers and relevant stakeholders as a unique tool to identify strengths and weaknesses and to define and build national strategies for developing and better leveraging their digital potential,” said Soumitra Dutta, Anne and Elmer Lindseth Dean at the Samuel Curtis Johnson Graduate School of Management at Cornell University and co-editor of the report.

“In addition to the persistent digital divide across countries, governments should also be wary of understanding, identifying and addressing potential internal digital divides so that new opportunities can be created for all and support enhanced social inclusion,” said Beñat Bilbao-Osorio, senior economist at the World Economic Forum’s Global Competitiveness and Benchmarking Network and co-editor of the report.

According to this, “digital strategies should not focus only on developing the ICT infrastructure, but also in creating the right conditions for an effective use of ICT to boost innovation, competitiveness and higher social inclusion,” said Bruno Lanvin, executive director of INSEAD’s European Competitiveness Initiative (IECI), and of Global Indices projects at INSEAD.

“Nations and organizations need to understand where they stand in terms of a Big Data maturity, assess their progress, and determine what they need to do to extract greater business and organizational benefits from the vast volume of data,” said Bahjat El-Darwiche, partner, Strategy& (formely Booz & Company) and sponsor of the report.